Whilst some patients suffer no adverse effects following mild/moderate head injury, around 50% may experience a range of postconcussion symptoms. Commonly reported problems include headaches, irritability, noise and light sensitivity, fatigue, anxiety and impaired concentration and memory. Such symptoms usually resolve within three months, but can persist for longer for some patients; one review found that between 20 and 66% of patients were reported to have symptoms at three months post injury; and between 1 and 50% reported symptoms at one year post injury.


There is some debate as to whether these symptoms constitute a ‘postconcussive syndrome’ or are simply a collection of symptom clusters. Nevertheless, such symptoms do exist and can have a significant impact on patients’ lives, adversely affecting psychosocial functioning and outcomes such as return to work.


Eyres Et. Al. concludes “Despite existing evidence for reliability and validity, as currently used, the RPQ fails to meet modern psychometric standards; it showed poor overall fit to the Rasch model, suggesting a lack of unidimensionality in the scale. This means that all 16 items of the RPQ do not tap into the same underlying construct of postconcussion symptoms and cannot be summated in a total score. The results of our analysis also indicate that the 0/4 category response option is not functioning as intended (from ‘not experienced’ to ‘severe problem’) for eight of the items. Given that the distribution of response frequencies across categories was sufficient to estimate thresholds in our sample, it was necessary to collapse some of the categories for these items in order to satisfy the measurement requirements of the Rasch model.

Thus, we recommend that combining response categories in these items will improve the scaling properties of the RPQ, though it may be beneficial to confirm these analyses on a larger sample of respondents. The options for further testing would be to collapse categories 0/1 and 2 together, or to collapse categories 2 and 3 together. At the individual item level, three of the 16 RPQ items (headaches, dizziness and nausea) showed misfit to the Rasch model, indicating that the extent of severity of headaches, dizziness and nausea is not parallel to the extent of severity expressed by all the items taken collectively. Thus these items do not measure the same construct as all the other items and should not be summated with the others. However, when analyzed separately these three items show fit to the Rasch model, indicating that they can be summated to form their own distinct scale.


Therefore, as with every other scale from Oswestry (except where it is mandated by certain carriers) to Migraine questionnaires, I urge you to “keep it real” and discuss in “real life terms what the patient can and cannot do. In the case of concussion, I strongly recommend using this form for every trauma patient and not creating a scoring system for both the above reason and the lack of reliability as outlined in the literature above.


I urge you to list the signs and symptoms on the form in the body of your history and then diagnose accordingly. 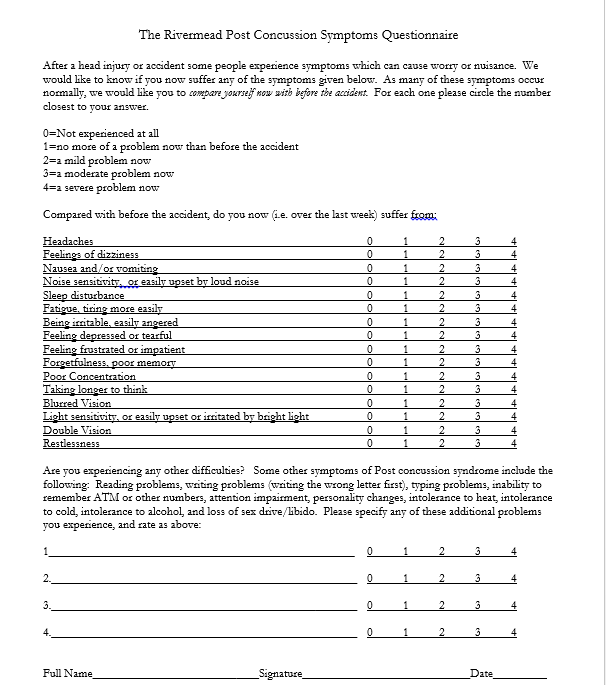