A Critical Legal Ruling in  2015 & Changing How We Practice

Hearsay: The long-standing policy disfavoring the admission of hearsay in Anglo – American courts, instructs that “hearsay is not admissible except as provided by the rules or by a law.” This general prohibition, subject to very exceptions, reflects that hearsay is presumptively being to be “untrustworthy and unreliable.” The hearsay prohibition ensures the accuracy of the fact-finding process by excluding untrustworthy statements, such as those made without the solemnity of the oath, and not subject to cross examination with the Jury’s critical observation of the witness’s demeanor and tone. 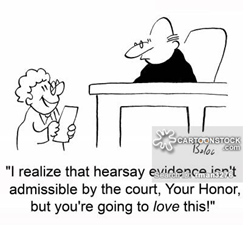 New Jersey 3-25-2015: The recent Appellate Division ruling in James v. Ruiz, A-3543-13T2 (App. Div. 2015) has addressed the ever present issue of “bootstrapping” through expert testimony. Expert “bootstrapping” involves one expert testifying about the opinions of other experts who do not testify. Often, the testifying expert’s sole purpose is to have the jury consider for their truth the absent expert’s hearsay opinions about complex and disputed matters.

The Court, in James v. Ruiz, found that plaintiff’s attempt to have an expert testify as to a non-testifying radiologist’s interpretation of a CT scan improper and directed the jury to consider only the opinions offered by the experts actually testifying before them. The trial Judge chastised plaintiff’s attorney for his attempt to backdoor the radiologist’s testimony without having him actually appear to testify.

After limiting plaintiff’s proofs by not allowing the introduction of the radiologist’s opinions, the jury returned a verdict of in favor of the defendant. Plaintiff filed an appeal.

This decision puts attorneys on notice that attempting to get non-testifying expert opinions into evidence through a testifying expert will likely fail. Out of extreme caution, if a party wants to ensure that a jury hears an expert's opinion, they should call the expert to testify.

In many states, it is usual and customary for the treating doctor to utilize as a foundation, the interpreting radiologist’s report or another specialist opinion in order to conclude an accurate diagnosis and then report it in your narrative, deposition or in trial. Historically, it has alwasy been accepted. This action, commonluy known as “bootstrapping” is now disallowed in NJ and it has been shared with me by lawyers in other states that it is also interpreted in many state's courts similarly. I also believe that this will become law or court rulings affirming it as law over time on a national scale.

Therefore, this trend now has to become your “modus operandi” and you need to both prepare for the future (except NJ where it is law and NY, where it is a common ruling in the courts) and start educating your lawyers to how you protect their clients and their cases. To lawyers, this becomes a huge issue and once understood, makes you a very significant option for their first-line of referrals.

As a result of that “hearsay policies”in courts across the country it is critical to understand that only a credentialed witness as confirmed by the courts as expert can testify. I have often held that is not “will a lawyer work with you” it is “can a lawyer work with you.” Therefore if you do not have the appropriate credentials you will be precluded from testifying and in essence the “invisible” to the entire legal proceeding.

The first thought that comes to the minds of many is either I am not going to ever get to court or I do not want to go to court therefore this becomes moot for me to prepare for something so unlikely. The previous statement is extremely Pollyanna-ish and the “kiss of death” for personal injury practice. The hard rule with the lawyers is they “will not start with you if they do not feel they can finish with you.” Therefore if they don’t see you as a candidate for testifying as a rule the lawyers will avoid you because almost every lawyer works their cases up for trial from day one even though they realize the unlikelihood of taking the case to trial.

In order to meet today’s standards you must have the “right credentials.” Historically I have taught that extra credentials are a bonus and the reason for getting more referrals versus less. In today’s marketplace in the medical legal arena is now a non-negotiable mandate to obtain credentials that lawyers can use in the court systems. This is inclusive of settlements, depositions and trials or the full spectrum of legal activities a lawyer is involved. If you are just beginning the program and have not yet read through all of the consultations please do not stop reading and take any courses yet. You must complete the prescribed sections of consultations prior to taking any necessary coursework.

Hearsay as you read in the opening ruling is becoming more prevalent around the country as the defense constantly looks for tactics to win their cases. The hearsay opinions are on the books in all 50 states and applicable at different levels. Again, it is my opinion based upon my research that this is going to be a more prevalent area of law that defense counsel will use to limit non-expert (the non-credentialed chiropractor's) testimony.

When meeting with the lawyer the following language is appropriate “I want to share with you that I understand the hearsay rules and in my reports and/or testimony you will get my opinions. This holds true for x-rays, MRIs, CAT scans and other images as well as my opinion on causality and functional loss. Please understand that most of my credentials are cross certified between medical and chiropractic academia and although I realize you will be settling most cases should you need to go to court my credentials has yet to be denied for me being expert.”

For those of you who are not yet credentialed or taken any of the recommended courses you will get there over time. Please understand that the courses you take matter greatly for your long-term future and just like this program is not meant for short-term gratification or quick new patient or two. Your coursework will be permanently engraved in your CV which will follow you for the balance of your career and serve you accordingly as you position yourself strategically within the referral community.

Hearsay is a huge issue with lawyers and the rules of evidence. Attorneys realize that doctors who “get it” and speak their language will serve them better for the long run and be one important piece of the foundation for a long-term relationship.