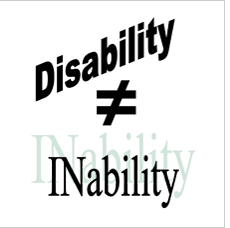 Disability (Wikipedia) is the consequence of an impairment that may be physical, cognitive, mental, sensory, emotional, developmental, or some combination of these. Disabilities is an umbrella term, covering impairments, activity limitations, and participation restrictions. Animpairment is a problem in body function or structure; anactivity limitation is a difficulty encountered by an individual in executing a task or action; while aparticipation restriction is a problem experienced by an individual in involvement in life situations. Thus, disability is a complex phenomenon, reflecting an interaction between features of a person’s body and features of the society in which he or she lives.


If a patient has any level of restrictions do not list the specific activity, list the limitation of that activity in terms of generalities, but specific to a specific action. As an example, do not say they cannot carry groceries, that is an impairment, but state they cannot lift anything greater than 15 lbs.

It is important in the legal-insurance-academia genre’s to separate impairment and disability with the proviso that there might some overlap, which is acceptable. There often needs to be overlapping because impairment is an extension of a disability, however in your narrative there has to be individual sections.

The following is an example of suggested language for disability:


As of the date of the accident 1/21/2013, the following permanent restrictions were ordered to avoid aggravations/exacerbations of his condition:

3.     No lifting of anything with outstretched arms

6.     No leaning over a desk or a computer for more than 20 minutes without a break continually