I received some of these images from Dr. Clay Wickiser in South Carolina.

Myelomalacia: Damage of the spinal cord ranging from mild changes of gray and white matter to significant structural disruption and softening of the spinal cord, referred to as myelomalacia. The pathophysiology of traumatic myelomalacia involves primary mechanical damage to the cord which is followed by secondary damage caused by decreased vascular perfusion, electrolyte shifts, and release of free radicals, cellular enzymes, and vasoactive substances. As in experimental SCI, where the initial lesion expands transversally as well as longitudinally. Focal myelomalacia may ascend or descend, involving multiple additional spinal cord segments or even the whole spinal cord.

Hemorrhagic infarction (bleeding) of the spinal cord can occur as a sequela to acute injury, such as that caused by cord compression. Herniated disc, spondylosis or any other pathology that causes compression can be the etiology of myelomalacia.  Typically, decompression will resolve symptoms, but often leaving residual functional losses, however imaging results mostly persist. 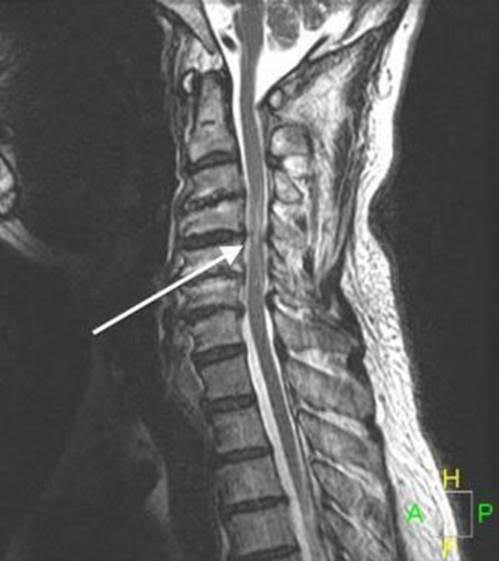 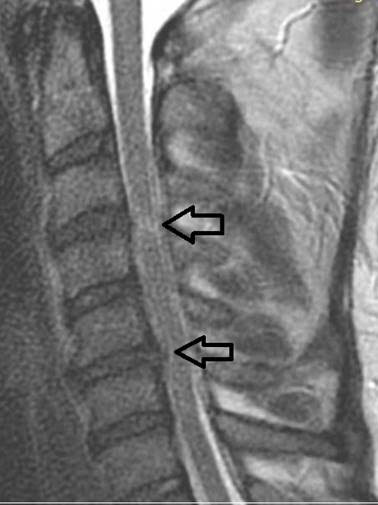 This image starts at C4 and goes to C7