But Not a Direct Sequella from Trauma

According to Massachusetts General Hospital (2014), part of the Harvard Medical School system, “As we age, the intervertebral disk may lose fluid and become dried out. As this happens, the disk compresses. This may lead to the deterioration of the tough outer ring allowing the nucleus, or the inside of the ring, to bulge out. This is considered a bulging disk” (http://www.massgeneral.org/conditions/condition.aspx?id=277).  Lippincott, Williams & Wilkins (2001), presented by the American Society of Neuroradiology, American Society of Spine Radiology and North American Spine Society  describe the degenerative (bulging) disc as follows, “degenerative disc disease: 1. A clinical syndrome characterized by manifestations of disc degeneration and symptoms thought to be related to those changes. 2. (Non-Standard) [Abnormal disc degeneration.] 3. (Non-Standard) [Imaging manifestations of degeneration greater than expected, considering the age of the patient]. Note: Causal connections between degenerative changes and symptoms are often difficult clinical distinctions. The term carries implications of illness that may not be appropriate if the only manifestations are from imaging. The preferred term for description of imaging manifestations alone, or imaging manifestations of uncertain relationship to symptoms, is degenerated disc rather than degenerative disc disease” (http://www.asnr.org/spine_nomenclature/glossary. shtml).

Fardon and Milette (2001) wrote, “Degeneration may include any or all of real or apparent desiccation, fibrosis, narrowing of the disc space, diffuse bulging of the annulus beyond the disc space, extensive fissuring (i.e., numerous annular tears), and mucinous degeneration of the annulus, defects and sclerosis of the endplates, and osteophytes at the vertebral apophyses. A disc demonstrating one or more of these degenerative changes can be further qualified into two subcategories: spondylosis deformans, possibly representing changes in the disc associated with a normal aging process; or intervertebral osteochondrosis, possibly the consequences of a more clearly pathologic process” (p. E94-E95).

Based on the definitions from academia, research and physiology, simply put, a disc bulge is synonymous with degeneration. Do not confuse this for a physiological disc bulge, which according to Robert Peyster MD, Neuroradiology, State University of New York at Stony Brook School of Medicine, “is a normal immature disc from a spine that has not matured. This should not be confused with degenerative disc disease.”

According to Fardone and Milette (2001), a bulging disc is “symmetrical [in] presence (or apparent presence) of disc tissue circumferentially (50-100%) beyond the edges of the ring apophyses may be described as ‘bulging disc’ or bulging appearance and is not considered a form of herniation. Furthermore ‘bulging’ is a descriptive term for the shape of the disc contour and not a diagnostic category. (p. E96). 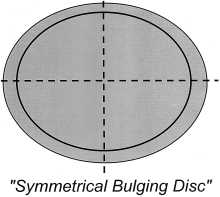 From “Nomenclature and Classification of Lumbar Disc Pathology, Recommendations of the Combined Task Forces of the North American Spine Society, American Society of Spine Radiology, and American Society of Neuroradiology,” by D. F. Fardon and P.C. Milette, 2001, Spine, 26(5), p. E96.

Lippincott, Williams & Wilkins (2001) presented by the American Society of Neuroradiology, American Society of Spine Radiology and North American Spine Society describe herniated disc as, “1. Localized displacement of disc material beyond the normal margins of the intervertebral disc space. 2. (Non-Standard) [Any displacement of disc tissue beyond the disc space]. Note: Localized means, by way of convention, less than 50% (180 degrees) of the circumference of the disc” (http://www.asnr.org/spine_nomenclature/glossary.shtml). Lama et al. (2013), report that, “herniation can be created…either as a sudden injury or by wear and tear (‘fatigue’)…a physical process driven by excessive mechanical loading” (p. 1127). The type of wear and tear described is similar to bending metal back and forth until it breaks at a stess point and "rips the annulus in a directional or focal direction vs. circumferential as in a pathological bulge.

Clinically, the type of bulges seen in post-trauma patients are degenerative bulges, with physiologic bulges reserved to those immature discs in pre-pubescents. These are differentiated from herniations simply based upon the morphology (appearance) of the disc and in conjunction with a detailed history, needs to be clinically correlated to the causal relationship to conclude an accurate diagnosis.

With aging, you will have both disc and endplate degeneration and according to Fardone and Milette (2001), “…affects essentially the annulus fibrosis and the adjacent apophyses…” (p. E99). This process takes months, even years to develop and cannot be directly correlated to a trauma that occurred a few days, weeks or months just prior to the acquiring of the MRI image. There simply isn’t enough time for the degeneration to occur.

CLINICAL PRACTICE NOTE: If your patient has a diagnosis of a bulged disc and the MRI was taken within 3-4 months of the trauma that diagnosis is not as Sequella from the recent trauma. Disc bulges can be directly from trauma if the image and resultant diagnosis is acquired approximately 1 year post-trauma where the disc has time to degenerate from the trauma-related pathology. This is typically found by surgeons who are considering invasive care, where the doctor focusing on spinal correction and/or rehabilitation typically orders the images either immediately or within a few months of the trauma based upon clinical presentation.

BULGING DISC AS A RISK FACTOR 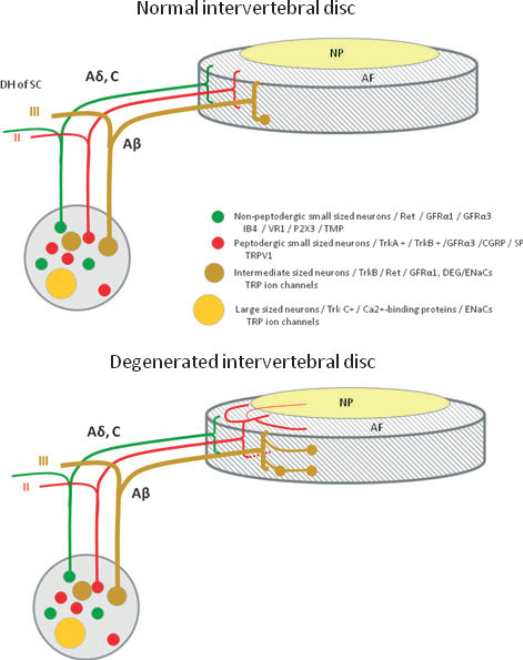 This indicates that bulging discs have nerves that are “ingrown” into the inner annulus and nucleus and are risk factors for the trauma case where you now have innervations that are more sensitive in nature due to the new growth. Therefore, an initialing factor of trauma will potentially cause more pain with less force in the degenerated or bulged disc.

CLINICAL NOTE: In the presence of a bulging disc and an absence of cord or root compression or thecal sac involvement (which, too, has A, B and C sensory fibers in the arachnoid layer of the thecal sac), the bulge becomes the competent producing factor for the discogenic pain of your patient. As a result, it would indicate that adjustments specifically at these levels be avoided and correction and stabilization of the spine should occur above and below the level of lesion.

CONCLUSION: Pathological disc bulges are degenerative in etiology in the post-pubescent patient and are not directly caused from trauma. These patients, as a result of the risk factor of a disc bulge and as evidenced by an MRI that either meets or exceeds, as reported by Studin (2013), the Guidelines of the American College of Radiology for acquisition of slice thicknesses and sequence protocols will be susceptible to greater pain as sequella with less force. The pain has also been clinically evidenced to persist upwards for the lifetime of the patient. With this category of patient, the clinician should consider treating and stabilizing the adjacent regions of the spine and supportive connective tissues. Typically, this patient has a poorer prognosis that will consistently de-stabilize and require more frequent care as a result of the degeneration and pain generators.