"The POWER of Being Expert in MRI"

This past week, I reviewed an MRI on a "GoToMeeting" session with a doctor. This is a common occurrence as I review images almost daily with many of you from coast to coast. It is also way cool as we all get to learn from each other. In addition, I get to see the good, the bad and the very, very ugly from imaging companies that are screwing you and your patients and getting away with it because too many of you and our colleagues are uneducated. I am also seeing many of you being responsible through taking the time and effort to get educated and holding those unscrupulous imaging companies accountable so you are no longer getting screwed. Here is an accounting of one such doctor who said "enough is enough" and the results as sequellae.

We did a "GoToMeeting" session 3 days ago and on the sagittal slice, there was an apparent disc breaking the plane of the outer rim, signifying either a bulge or herniation. Upon review of the axials, the company took 4 slices, which appeared sufficient. The company took the following slices: 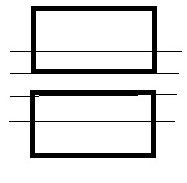 If you have taken the MRI Spine Interpretation course, you will realize that the slices never went through the disc. We got great bone slices and the radiologist reported incorrectly on the bone as well. The MRI never explained why the patient was having left lumbar radicular pain.

I told this doctor, who is a VERY amiable, extra sweet, ultra-respectful, nice person by nature to call the imaging company and demand that they re-take the images properly. I also told him to be more than a little pompous...Actually, I told him to act like me. I wanted the imaging company to know that the "jig was up" and they could no longer get away with raping the public.

I gather you can appreciate my distress over this as I see it all too often at the expense of the patients and unsuspecting doctors. They do know better and do not care because all they want to do is make money and could care less about anything else or they would have never let this be released without re-doing it.

The imaging company has 2 chances to make this right, first, with the technician who performs the exams and second, the radiologist who reviews the images. The real culprits are the owners who do know better and probably tell everyone to turn a blind eye. There is a lot of money at stake at this level for the imaging companies and a lot at stake for the patients and doctors who have blind faith in the process.

This VERY amiable, extra sweet, ultra-respectful, nice doctor did what he had to do and the following string of e-mails are the result:

Sending Mrs. Patient for a second MRI study.  I called the imaging center to let them know I was unhappy with their imaging and they agreed to do a second imaging study at no expense.

I told them several of the slices go through the body of the vertebra (not the disc).  Therefore, these images have little value to me.  Also, at 2 levels, the slices miss the main body of the herniations.  The medical doctor who initially ordered the test (I did not order the MRI...I saw the patient late in the game), did not make proper specifications to the imaging center and the tech at the imaging center did a poor job of taking the MRI.

Will keep you posted on the results of the second imaging.

The doctor also followed protocol and informed the lawyer of his actions. Here is the reply from the lawyer:

Best work I have seen from a doctor yet!
Nicely done

The results of the MRI are not relevant to this consultation, only that they re-did the images. What is relevant is that the doctor can now get an accurate read because he is educated about MRI and will settle for nothing less than clinical excellence from not only himself, but everyone he works with...and...this is how you win with lawyers...not fancy dinners, newsletters or any other nonsense. You win in the game of personal injury through clinical excellence.